TOMMY GEMMELL’S death on Thursday 2nd March 2017 further depleted the ranks of the mighty Celtic squad that swept all before it in Season 1966/67 en route to football immortality in Lisbon on 25th May 1967. But nothing can diminish the glorious memory of one of the game’s most swashbuckling characters – arguably the finest full back of his generation, pioneer of the wing-back role that has since become standard in modern football and undoubtedly a pivotal force at the heart of Jock Stein’s pulverizing “Green Machine”. 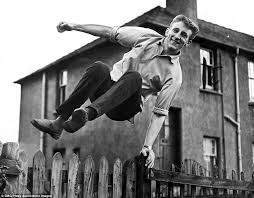 The “Terrible Dunt” that was Tommy’s trademark thunderbolt shot lit up not only the Estadio Nacional that landmark day but also grounds all over these islands and beyond. Woe betide anyone who got in its way; and pity the poor goalkeeper who had to confront the awesome prospect of a Gemmell howitzer from twelve yards!

This is our quirky tribute to one of the most distinctive characters ever to grace our beloved Hoops:

You know how, sometimes,

you just can’t quite put your finger on it –

the right word … the one that sums up

exactly what you’re trying to say.

but that doesn’t quite cut it,

Too Arsène Wenger for my liking …

and let’s face it, who likes Arsène Wenger?

No, sometimes you just can’t beat

the vernacular – the old mither tongue

that lets you nail it in one.

it took me so long: