PENALTIES, apart from the rare, genuinely indisputable “stonewaller”, are ALWAYS contentious.  Those who welcome the award tend to defend it to the hilt, while those who resent it, are outraged and tend to condemn it out-of-hand, often even when it is fairly conclusive.  It’s in the nature of things.  Just like legitimate “banter”, it is part of the healthy controversy that is the lifeblood of football and the fuel of water-cooler, shop floor or watering hole debate.

There is, however, a dark downside to the genuine controversy that enriches the game – a downside born of sour grapes, bad blood, bitterness, anger, envy and a range of other motives that demean and diminish our sport.  A downside that generates accusations of cheating, conning and diving simply as a matter of course, irrespective of whether any of those artifices are at play in the incident – which, on occasion, they undoubtedly are.  Often, it’s as straightforward as deep-seated ill-will towards the opposition who are the beneficiaries of an award – especially when it’s Celtic and it proves to be, to a greater or lesser extent, decisive.

In the past week, or so, Celtic have benefited from two penalty awards, both against Motherwell and both in high-stakes situations.  To say they have been the cause of some controversy is the understatement of the season, so far – real high calibre down-play.  Foaming-mouthed critics from all sections of the football community and media have been lining up to take a pop at the “Invincible” Champions – perhaps understandably from the opposition camp; but less so in what should be more impartial, open-minded and … rather surprisingly … even instinctively pro-Celtic quarters.

It has been a staggeringly unedifying spectacle!

Never mind the fact that Celtic dominated both matches and thoroughly deserved the results they got, or even more – such considerations pale into insignificance when there is a big stick available with which to beat them.  Never mind the fact that they were subjected to intense provocation by dint of the blatantly agricultural tactics of a desperate opposition – come on, it’s a man’s game, stop whingeing, I hear some say!

Yes, it’s a man’s game … but that doesn’t excuse the kind of thuggery that could have put Moussa Dembele out of the game for months, maybe worse.  Thuggery that should have been dealt with by a flourish of red that would have seen Cedric Kipre doing the walk of shame long before he had the opportunity to get involved in the incident that led to one of the two penalties that caused such widespread and sinisterly comical outrage.

So, what about those “controversial” penalties?

The first came at a point in the League Cup Final when Celtic were starting to turn the screw on a “determined” but largely lacklustre Motherwell, chasing their first silverware in 26 years.  Our flying left wingman had surged deep into the opposition box and almost clean through on goal when subjected to a sly tug by a despairing defender who should’ve been in the dressing room long before. 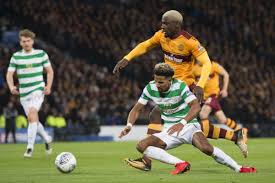 Soft?  Maybe, depending on your point of view.  A penalty?  Most definitely and certainly in the eyes of a well-placed MIB.  Controversial?  Only if you want it to be!

The second came alarmingly late in the game three days later at Fir Park, in the League.  Chasing our 66th unbeaten match in succession and trailing to a freakish own-goal, it was beginning to look bad.  Then, with two minutes remaining on the clock, for some reason best known to himself, Motherwell defender Rose decided to barge and push Callum McGregor off the ball when he was heading away from goal but well inside the penalty area.  The tackle was fairly typical of the Steelmen’s “robust” approach again that night … and in full view of referee Willie Collum, who pointed to the spot without hesitation.

Soft?  Nope, not in my book.  A penalty?  Most definitely ( … our first of the season in the League, btw! … ).  Funny, that, when we spend so much time exerting pressure in the opposition box.  Controversial?  Again, only if you want it to be!

So, there you have it … can’t see what all the fuss was about, myself.

Wonder if we’ll get one today?